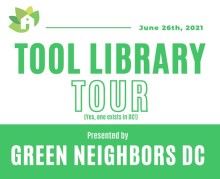 DC HAS A TOOL LIBRARY!  Did you know?!?  Neither did we until late last year.  We were trying to decide whether to start one, but this great one, also known as DPR’s Garden Tool Share already exists, with 139 types of tools, not all garden-related!  Weed-whackers, power washers, hedge trimmers, paper-shredders, composters, a table saw, […]
Read More » 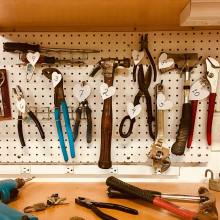 Did You Know – DC has a TOOL LIBRARY?!

Need to borrow a keyhole saw? How about a paper shredder? Hedge trimmers, shovels, soil-testing kits, a ladder, wheelbarrows, some ….

For those who keep track, our GNDC meeting is a week later than normal due to a conflict and so as to follow up on some research leads regarding our new priority – creating community resilience via building community resources – starting with tool libraries. Tool libraries are so you can check out tools you […]
Read More »

Tip of the Week

Compost is Available at Fort Totten!

The Fort Totten Transfer Station in northern DC, where waste is basically transferred for disposal, e.g., solid waste, electronics, hazardous, and paper to be shredded. It is now also a place where good waste, i.e., compost, is transferred back to residents. Up to five 32-gallon bags can be used to bag the compost. Plants, here it comes!