Join us for the Polar Bear Plunge! 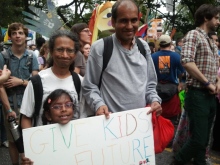 On September 21, Green Neighbors members joined in The People’s Climate March, the largest climate march in history.  Over 400,000 people marched through the streets of New York, while 2,646 solidarity events took place in 162 countries.  Worldwide, over a million people called on the world’s leaders meeting at the September 23 UN climate summit […]
Read More »

Tip of the Week

Milk in Deposit Bottles in Cheaper.

Striving to minimize packaging? Good news if you buy diary milk: refillable bottles are available at stores like Yes Organic, Safeway, and others, and the price beats that of milk in cartons (which may or may not be recyclable). The bottle deposit is $2, refunded in cash when return it or as a credit for the new bottle.